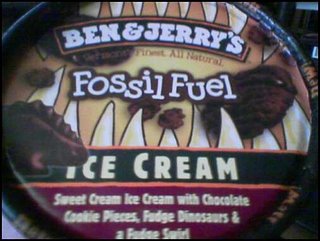 Having wrapped up a big deadline (for an as-yet-unannounced project) and in need of sugar-driven power to finish the next one, I happened upon this new selection at our local, over-priced Broadway grocery. In a fit of inspiration, I chose the iced cream that seemed to have the most in common with the name of this blog.

A pleasant surprise, the Fossil Fuel flavor does not actually contain petroleum or petroleum by-products (unless "delicious" is a by-product). It certainly fills the mental gas tank and powers the emergency generator of creativity. It does, however, take a little time to figure out what exactly you're getting.

For the record, the ingredients: Sweet cream ice cream with chocolate cookie pieces, fudge dinosaurs, and a fudge swirl.

I'm not sure what the difference is between sweet cream ice cream and the normal vanilla variety B&J do so well, except it didn't immediately taste as sweet. In fact, the first bite reminded me of one of those sugar-free faux frozen treats that are supposed to keep dieters from making midnight runs to 7-11. So I guess the "sweet cream" isn't really as sweet as all that, and it does float to the top.

After that initial mild disappointment, things improved exponentially with each spoonful. Once past the weird, somewhat bland "sweet cream effect" (like the butterfly effect, but creamier and with less Ashton Kutcher) I hit my first vein of fudge swirl. And my friends, this fudge swirl makes it all work. The cookie pieces are fine, your basic chocolate cookie; the dino-fudge thingies too are fine, though Vermont's finest ice cream makers might want to consider figuring out a way to justify the name of a product that *doesn't* include the chocolate equivalent of a nametag (I refer you to the chocolate cows in their Vermonty Python flavor).

Somehow, combined with the other ingredients, the fudge swirl immediately tastes like a hot fudge sundae, the really simple but perfect kind you remember from childhood (at least, I do, I was a fat little kid). If anything, I wanted more of that and less of the cookies and the choco-dinos.

You know what would wrap up this nicely? Some scores, based on a scale of one to ten.

Ingredients: 6
Sweet cream? I don't know what that is, it's ice cream, it should be sweet anyway, yeah? Cookies? Good, but uninspired. Ditto for the chocolate--excuse me, *fudge*--dinosaurs. But that fudge swirl makes it all work.

Flavor: 8
Thanks to the fudge, what began as a "meh" experience became a thrilling blast from the flavor past.

Packaging: 5
I dig the dino-teeth, but it would have been so much cooler to see an actual dinosaur. Or an oil rig. Or a dinosaur eating ice cream atop an oil rig.

Overall (Not necessarily an average): 7
Remember, in the relative world of iced cream ranking, you have to try really hard to make iced cream taste bad. But can you make it taste not just good, but spectacular? That's the challenge. I had my doubts at first, but thanks to a rich vein of fudgy goodness, the boys from Vermont were able to remind me of ice cream sundaes and birthday parties when I least expected it. A solid 7.