Yeah, But What Is It?

Much has been made of the Gliese 581c, 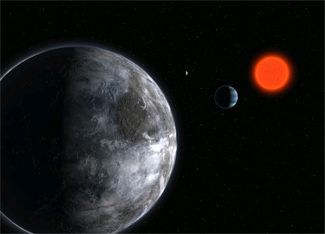 a potential "Super-Earth" which I'm told by the Internets orbits a red dwarf star named Gliese 581. It's some 20 light-years from what will no doubt soon be called "Regular-Earth" in all of our textbooks and, indeed, in our hearts. And since we have safe light-speed travel in our popular fiction and entertainment, it's safe to say we'll soon build such technology to travel to Gliese 581C to explore this strange new world and figure out how to spread freedom there. By then, the planet will probably be called something like "New Earth," "Arbusto," or (with any luck) "Ceti Alpha VI." And maybe some comic-book planets. Perhaps planets from a video game or two. But that's it, okay? This is science, damn it.

The Gliese 581 system is in our galaxy, so that rules out any extragalactic planets--that means for the sake of argument I'm ruling out Star Wars worlds that are by definition situated in a galaxy rather far away. Besides, that's SPACE FANTASY! or so Marvel Comics always told me.

For that matter, there's no way I'm going through all supplemental materials to figure out where these places I'm talking about are supposed to be. I just don't have that kind of time. I've narrowed it down to a few possibilities. Most of those links go to spoilers, by the way, so if you don't know who won the epic contest between Mork and the Fonz, beware. Speaking of which, first up is....

Ork
A distinct possibility. Orkans were, if memory serves, physically superior to humans (had Mork not fought against t

he indefinable mystic power of Fonzie's thumb, and simply slugged the Earth champion, he might well have conquered the planet back in the '50s). If Gliese 581c is egg-shaped, I say this is a slam-dunk.

Romulus
Ah, but if this is Romulus, where's Remus? Eh? Eeeeeh?

The Algae Planet
Certainly the most likely contender on the list. I have a feeling that a place orbiting such a crappy star (no offense to Gliese 581, but she's probably seen better eons) would have an equally crappy environment suitable really only for stuff like algae. And perhaps delicious candy.

Reach
It's certainly close enough to be Reach. Note that all I know about Reach is gleaned from a half-remembered Halo novel, and not The Fall of Reach. But if it was Reach, 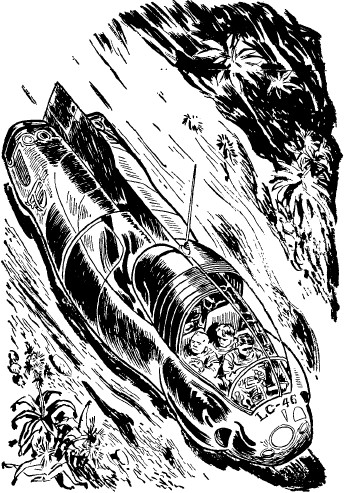 Klendathu
Maybe. But if it is, why haven't they already flattened Earth with beetle-butt bombs? Think about it. Yeah.

The Genesis Planet
Don't be ridiculous. The Genesis Planet doesn't even exist yet. Barring some sort of temporal slingshot effect, that crappy shower-curtain guy from the future on Enterprise, a temporal rift, the Xindi, Q, or unauthorized or unintended use of the Guardian of Forever, the Orb of Time, a time-travel pod, a timeship, a temporal transmitter, chroniton particles in general, or the Nexus, it's just not possible.

LV-426
Totally could be this. Will we learn in time? And if not, does that mean Paul Reiser can finally be incarcerated for his role in this future debacle? se to Earth to be Kobol, but if we find pyramids or an abandoned opera house, it could well be.

Vogsphere
A truly terrifying possibility, and one that we would be wise not to overlook. Is the coming of the hyperspace bypass inevitable? I say we can't take the chance.

Caladan
If we find oceans on Gliese 581, this one cannot be discounted. Indeed, we should begin settlement immediately. Property values on Caladan are going to be astronomical, what with all those cool gothic-y castles and waterfront property.

Oa
Not a chance. Everyone knows Oa is at the center of the galaxy. Yeesh.

Arnessk
Man, I hope not. Eidelons give me the screamin' willies.

The Ball Homeworld
If we do not fight the Balls there, they will bounce all the way back here, take all of our jobs and all of the good places to live...in short, they'd roll all ov er us. The Balls must be thoroughly licked, and we must begin work on the anti-Ball technology immediately.

Terra
Why not? Randy Mantooth has to have gone somewhere. I haven't seen him in ages, but you can't swing a dead daggit without hitting Kevin Tighe.

Bajor
Just doesn't feel right. I'm pretty sure I saw Bajor's sun a few times, and it didn't look anything like a red dwarf. Then again, it's worth keeping an eye out for wormholes. A shortcut to the Gamma Quadrant would be worth it.

New Caprica
What are you, crazy? If this was New Caprica, wouldn't it be surrounded by a nebula that completely screws up Cylon DRADIS? Now don't you feel stupid?

Akir
You know, from Battle Beyond the Stars? Hello? This thing on?

Rimmerworld
Entirely possible, should the psi-moon that became Rimmerworld were to fall into some kind of encounter with a white hole.

Krypton
Oh, come on. Krypton blew up years ago. Even at 2 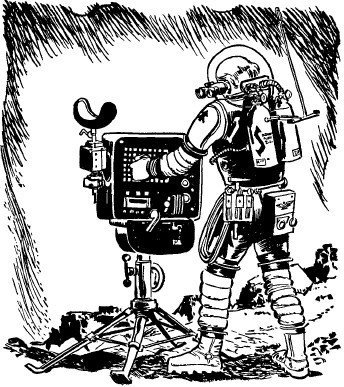 0 light-years distant, we would have seen it kerplode.

The Draconian Homeworld
Though I don't believe it was ever visited or depicted on Buck Rogers in the 25th Century, the Draconians had to live someplace, right? Someplace with lots of Tigermen, presumably. We already know these Draconians will attempt to destroy us some 500 years hence--what are we waiting for? Make peace with the bird people, give the mutants some public housing, and get on the horn to Doc Huer already!

Krankor
I'll let Phantom of Krankor make his own case. Only a fool stands in the way of Krankor.